Even long after the flames of a wildfire are gone, those who live nearby face a serious increase in the threat of flooding. by Alex Hager, Aspen Public Radio TWEET SHARE 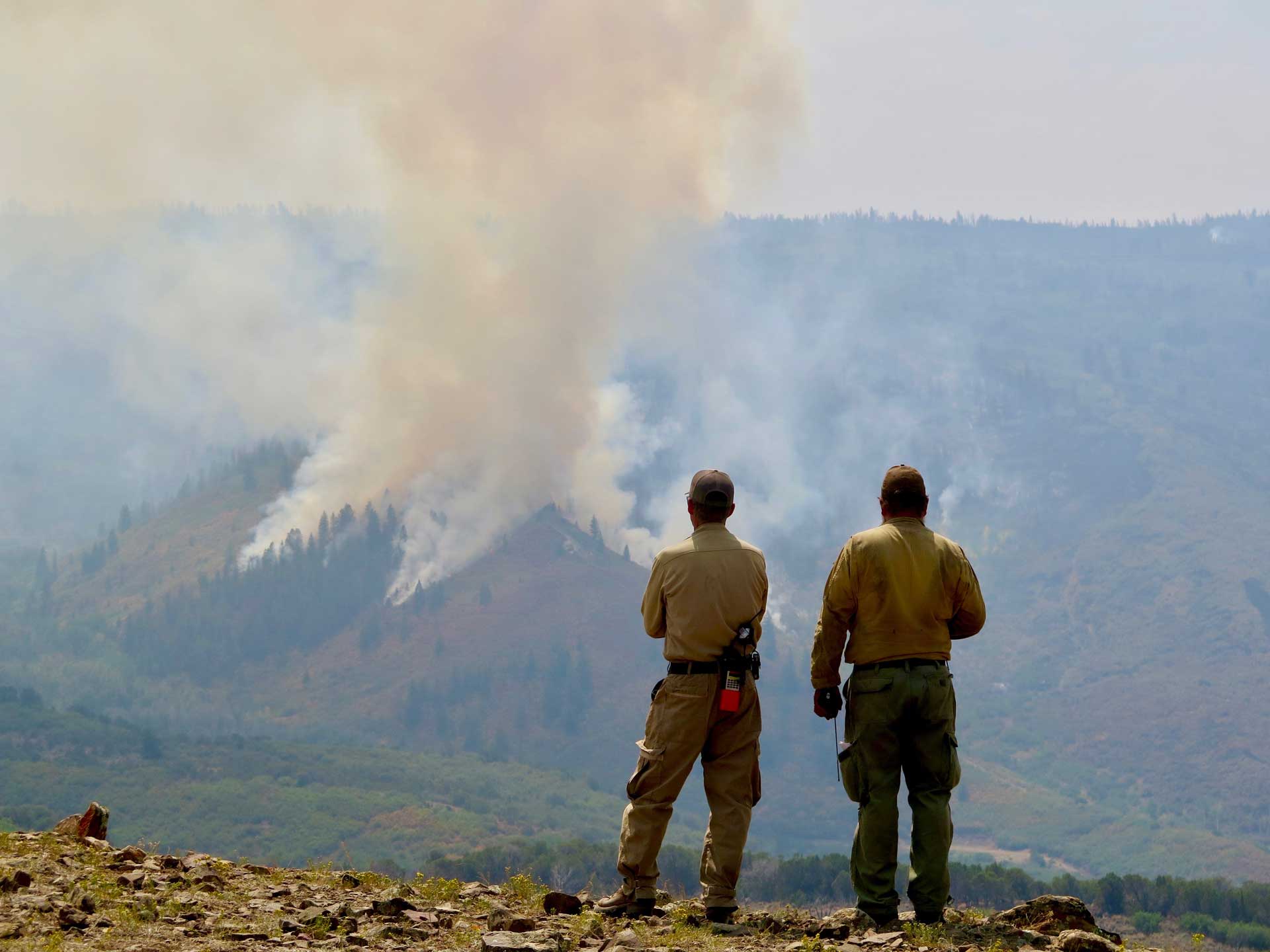 Firefighters watch a controlled burn within the Grizzly Creek Fire in Colorado. The fire has burned more than 30,000 acres near Glenwood Canyon. Now, the charred hillsides pose a flood risk for nearby areas.
Alex Hager/Aspen Public Radio

Major wildfires have burned through the Western U.S. in 2020, breaking records for their scale and damage. As firefighters tamp down their immediate effects, those who live nearby are coming to grips with the lingering danger of wildfires. Even long after the flames are gone, residents face a serious increase in the threat of flooding.

For No Name, Colo. resident Sue Lavin, that threat is top of mind, more than a month after the Grizzly Creek Fire burned in the upper reaches of the No Name Creek, which runs through her backyard. She lives alone and says the running water normally makes for great company. 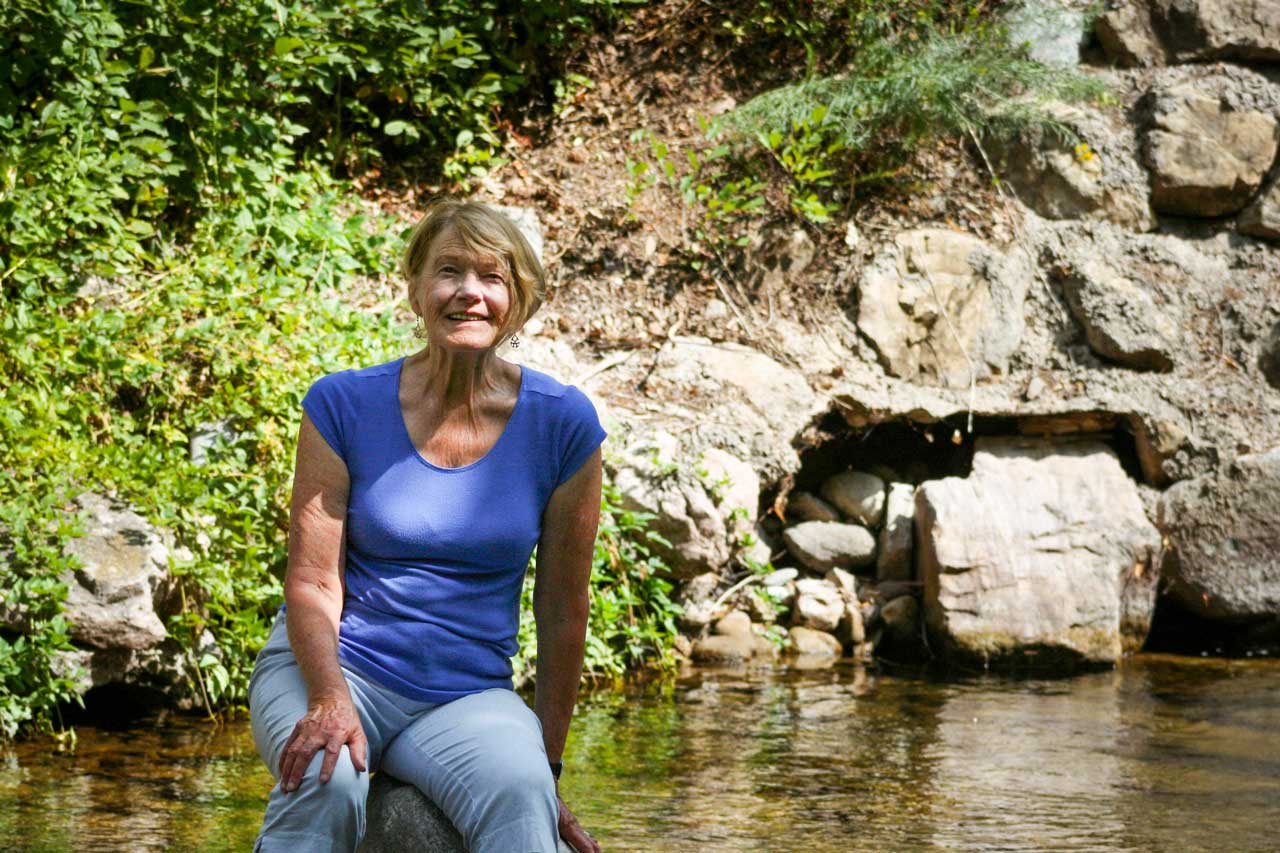 No Name Creek runs right through Sue Lavin’s backyard. She said it can be hard to have a conversation on her property in the spring, while the river rushes loudly during peak runoff. Her house is now in an area of increased flood risk after the Grizzly Creek Fire.
Alex Hager/Aspen Public Radio

“The sounds you hear in the background accompany me all day every day and put me to sleep at night,” she said from her back patio. “Corny as it sounds, I consider the creek my friend.”

Lavin’s home and her couple dozen neighbors are tucked between Interstate 70 and the Colorado River in a narrow section of Glenwood Canyon.

In the waning days of summer, the sound of that creek is just a gentle babble as water slowly meanders into the nearby Colorado River. But Lavin has seen it get much higher during peak runoff. When water is surging down past her house, you can’t escape the noise.

“You can’t have a conversation anywhere near the creek,” she said. “I belong to two book clubs and I can never have the meetings at my house because nobody would understand each other.” 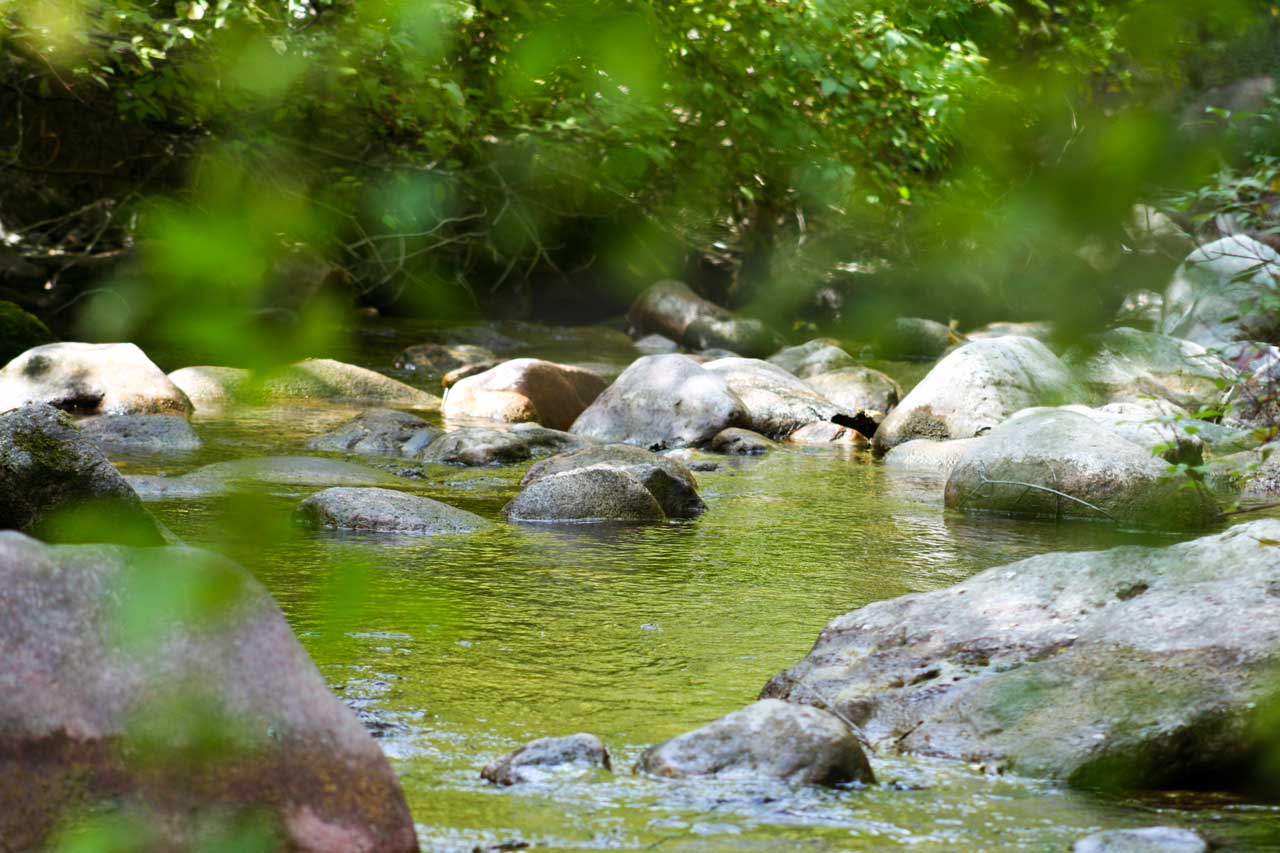 No Name Creek is low and calm in the waning days of summer, but can swell much higher during spring runoff. The narrow creek bed could be overwhelmed by fast-moving water and debris if heavy rain falls on areas burned by the Grizzly Creek Fire.
Alex Hager/Aspen Public Radio

Now, the creek threatens to make an unprecedented rise, swelling to levels that could severely damage Lavin’s property and home.

No Name is just a stone’s throw away from the furthest reaches of the fire. The community was forced to evacuate as wildfire spread rapidly through the canyon, sending residents away from their homes for 11 days and scorching nearby hillsides.

Lavin considers the fire and new flood threat to be up-close-and-personal reminders of climate change for her and her neighbors.

Since August 10, the wildfire has burned more than 30,000 acres. Although it is almost entirely contained now, the fire’s effects will linger for years. That will mean the potential of serious flooding in No Name.

“We will have post-fire flooding and we will have post-fire debris flows that are impactful to residents, communities, public infrastructure and water quality,” said Carol Ekarius, CEO of Coalitions and Collaboratives, a Colorado-based nonprofit that works with communities recovering from wildfire. “It's not a maybe. It’s an absolute going to happen.”

Ekarius said the exact severity of flooding in No Name is hard to predict without a “crystal ball,” but she’s confident there will be some degree of flooding.

That, she said, is a direct aftereffect of the burn. When a fire moves through an area, it scorches the ground and everything on it. Plants and soil, which usually help absorb water during rainfall, are reduced to an ashy char. 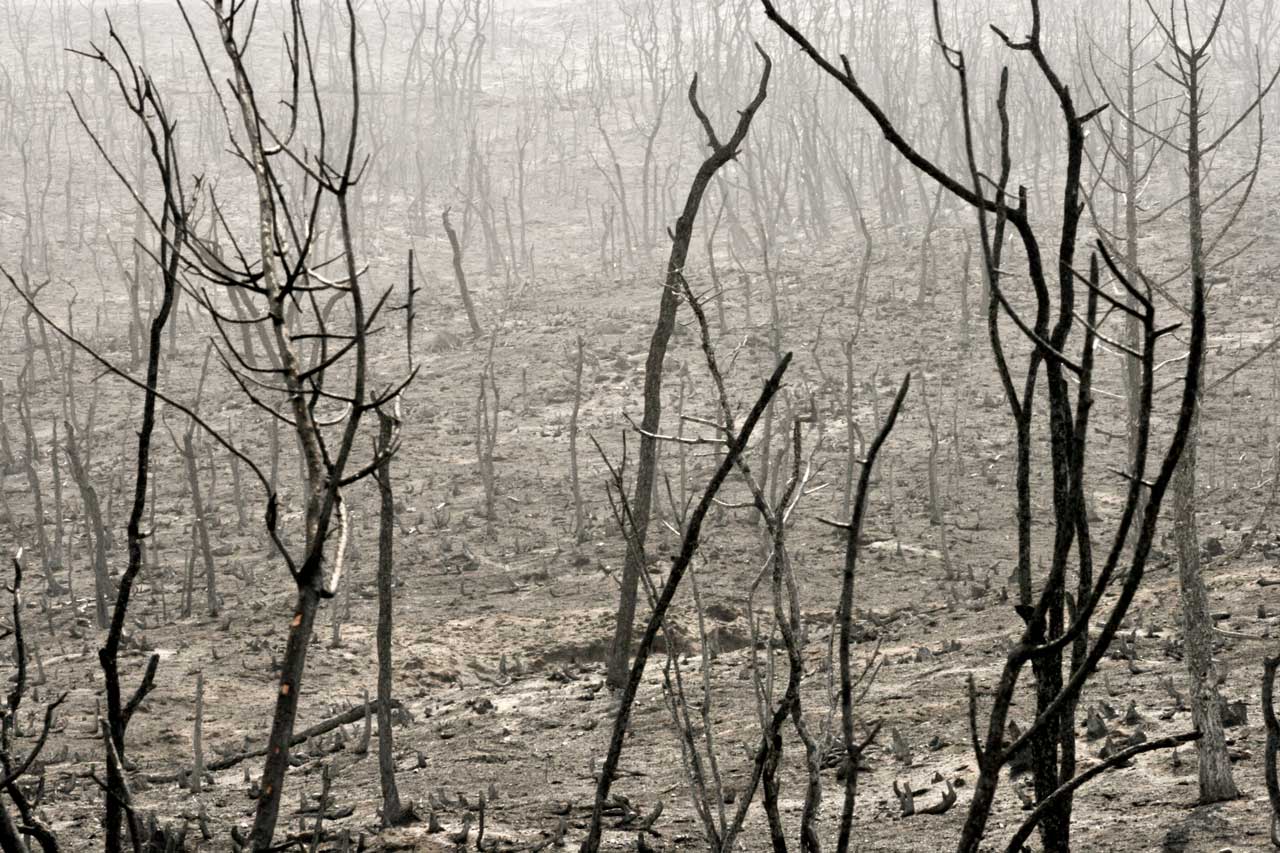 This area above Bair Ranch shows the ashen aftermath of the Grizzly Creek Fire, where scorched vegetation and soil can no longer absorb water.
Alex Hager/Aspen Public Radio

“Soil and rocks will age in a high intensity fire – the equivalent of a thousand years worth of aging from just sun, wind, rain and ice,” Ekarius said.

With moisture-absorbing materials gone, rainfall has nowhere to go but down to the ground. A rainstorm or snowstorm would normally soak the hillsides, with soil and plant roots keeping water near where it fell. But with those burned away, gravity forces the runoff straight downhill to the bottom of nearby drainages. Ekarius said this phenomenon means even a normal summer rainstorm could have the destructive power of a freak downpour that only comes along once a decade.

“The storm to flood ratio increases by orders of magnitude,” she said. “The one year storm does behave like a 10 year or greater event. And the 10 year storm behaves like a 100 to maybe 500 year event. “

When that water rushes downhill, it picks up dirt, brush and rocks along the way. Ekarius said a rainstorm could quickly create a roiling slurry of debris. Rushing water full of detritus can overwhelm shallow creek beds that are simply too small and winding to handle those flood-level quantities of water.

That debris can also plug up culverts or narrow, winding parts of the creek and lead to pooling and flooding near homes. To help mitigate the worst effects of that, a team from the U.S. Department of Agriculture’s Natural Resources Conservation Service is plotting changes to No Name Creek that will help it handle increased flow.

Stephen Jaouen, an NRCS conservationist in the agency’s nearby Glenwood Springs office, supervised that team. He said the No Name Creek bed is fairly deep and could handle more water. But to prepare for a monstrous, worst-case-scenario flood, he identified spots to put sandbags and build rock walls.

“Just to make sure that if something does get clogged, it has a path of least resistance that doesn't go into somebody's house,”Jaouen said.

Jaouen usually works with farmers and ranchers in the area, to help set up conservation practices. But now, his office has been called in to help with the long-term effects of wildfire, which he said require attention long after the flames have died down. 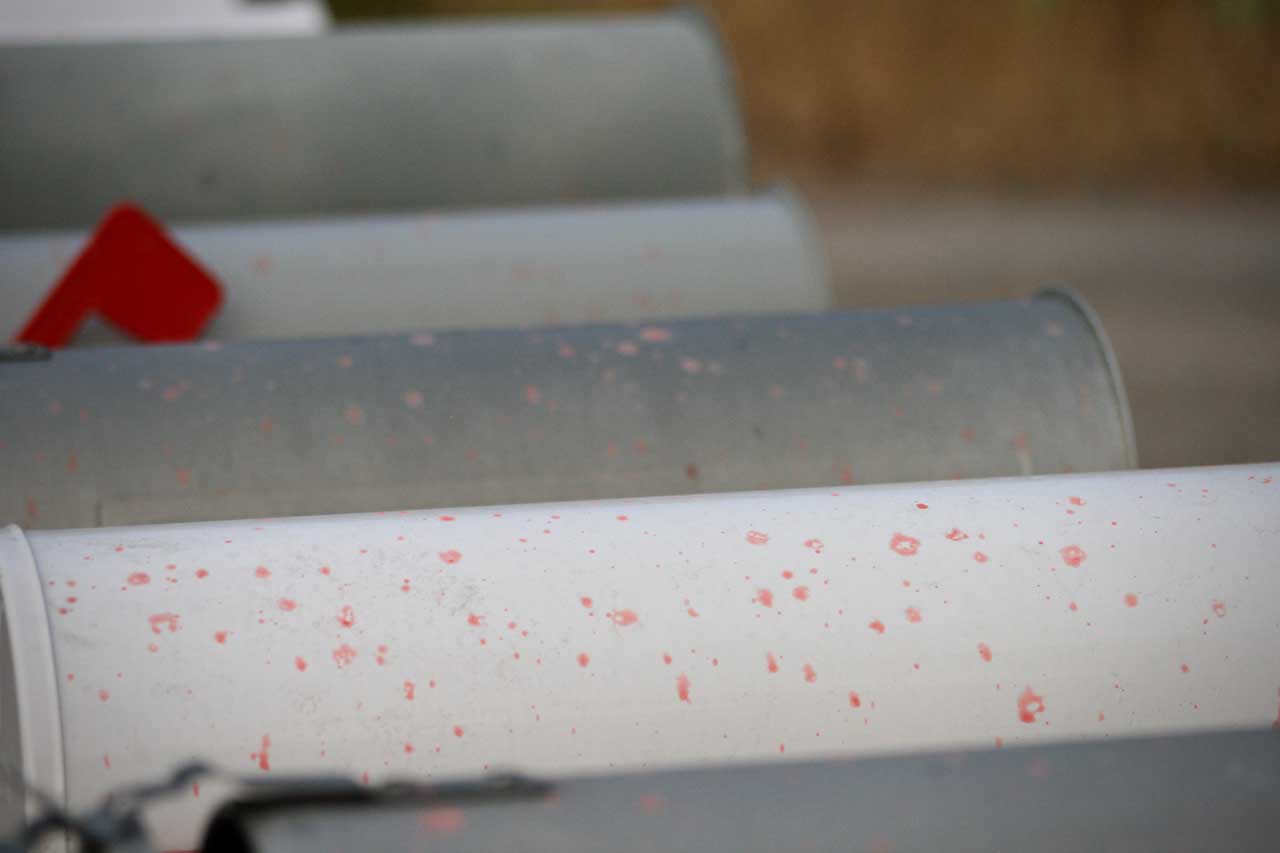 Droplets of fire retardant slurry dotted the tops of mailboxes in No Name in the days after evacuation orders were lifted. Although the Grizzly Creek Fire did not reach No Name, the community was filled with reminders that it had come close.
Alex Hager/Aspen Public Radio

“People need to realize that after a fire, there's still these lingering effects that can affect human beings,” he said. “That's why we're here, trying to protect those lives and structures.”

The NRCS received $3.75 million to use its Emergency Watershed Protection Program for post-fire recovery with four fires in Colorado – the Grizzly Creek Fire, the Pine Gulch Fire, the Cameron Peak Fire and the Williams Fork Fire.

In No Name, the agency is working with the Grizzly Creek Fire’s Burned Area Emergency Response team. The BAER team is composed of hydrologists and other scientists who interpret post-fire changes to the landscape in the context of threat to land, people and buildings, then advise protective measures.

One property that will likely need some of that protection is Sue Lavin’s in No Name.

“I'm absolutely grateful that (the house) didn't burn and I want to preserve it,” she said. “Not just for myself, but for my daughter and her family and future generations. So I'll do whatever concrete steps they recommend.”

In addition to making physical changes, officials say people in the flood zone should document their valuable possessions in case they need to make an insurance claim. During rain storms, they should tune in to a National Oceanic and Atmospheric Administration radio and prepare for a quick evacuation.

“They may look and go ‘oh, well we’ve never flooded here.’ But if they’re close to a drainage, they need to be ready to leave,” Ekarius said.

Lavin has heard all the recommendations and is preparing for the worst, whether that be a one-time evacuation, or recognizing that floods might get so dangerous they force her to leave No Name permanently.

“If things get bad enough, I will have to adjust my life,” she said. “I will find that heartbreaking and even thinking about it as heartbreaking, but I'm not a fool. I will prepare for such an instance. And if I have to take it, I will take it.”

This story is part of a series looking at where water and wildfire intersect in the West, produced by KUNC, KJZZ, KHOL, Aspen Public Radio, Wyoming Public Radio, and supported by a grant from the Walton Family Foundation.

UA ready to have all purchased renewable power in May TEP brings new renewable energy solar system online this month Save Oak Flat Act has passed out of U.S. House committee
By posting comments, you agree to our
AZPM encourages comments, but comments that contain profanity, unrelated information, threats, libel, defamatory statements, obscenities, pornography or that violate the law are not allowed. Comments that promote commercial products or services are not allowed. Comments in violation of this policy will be removed. Continued posting of comments that violate this policy will result in the commenter being banned from the site.